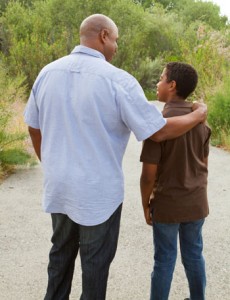 Most parents think of their child as “officially” an adolescent when they technically become a teenager on their 13th birthday. And they think their project of raising the child to adulthood is pretty much over after high school, when most of these young adults leave the home to join the service, go to college, get a full-time job or get married and start having their own kids. They think raising a teenager is about surviving a strange, perilous 5-year period.

But there’s a big difference between the concept of “teen” and “adolescent.”

By the time a child reaches the age of 13, she may have already been an adolescent for two or three years. Adolescence begins at puberty. It’s the abrupt beginning of a period of accelerated physical and mental growth and eventual maturation, which ends in the early 20s. So we’re talking about roughly a 12-year period, which begins around age 11 (plus or minus) and ends around age 23 (plus or minus).

Physical growth takes care of itself. The child’s brain releases a hormone that signals the pituitary gland to start releasing growth hormones into the bloodstream. These chemicals stimulate the child’s body to grow, body hair to appear, and the reproductive organs to mature. There’s nothing you can do to slow this process down or speed it up. It’s a phase of life that every normal person experiences at that age. It just happens, and in the early 20s it stops happening. By then, the child is an adult, physically speaking.

Mental maturation is a different story. It takes place during the same span of time, but the child will have work hard to achieve mental maturity. At birth, every normal, healthy child has the basic brain hardware. All parts of a human brain are formed and present, like a new computer ready for an operating system and other software. These basic “programs” are needed to handle the “data” – sensory input and conceptual and stored memories of that input.

To “wire” all the basic functions of the brain, such as seeing, hearing, standing, walking, and talking, a child has to work hard. The brain areas are developed from back to front – the visual area first and the intellectual area last. To stimulate a brain area to connect into circuits, a child has to exercise the function repeatedly. Fortunately, a child is powerfully motivated to see, hear, stand, walk and talk. It’s how a young person becomes a part of the world and gets what she wants.

The last area to be wired is the prefrontal cortex (PFC), located right behind the forehead. It’s in charge of “connecting the dots,” taking input from other parts of the brain and forming meaningful associations. This allows the brain to relate cause and effect, think logically, analyze situations, solve problems, foresee consequences, use judgment and make decisions. In other words, higher-level thinking. The problem is, most adolescents aren’t internally motivated to do the work. They can usually get what they want without exercising critical thinking and judgment.

So a young adult can grow a fully mature body with a relatively immature intellect – and after adolescence the growth period is over and the person has to live with that body and that mind for the rest of her life. She can continue to learn and deal with her world, using and building on the basic intellectual structure. But she’ll forever be limited to the foundation she wired during adolescence. You can’t build a huge mansion on a tiny foundation.

Obviously, mental maturation is way more important than physical maturation. Everyone ends up with an adult body. But whether they end up with a superior mind – or something much more limited – depends on whether they were challenged and encouraged to do a lot of critical thinking and decision making as a young adult.

So if you’re a regular reader of this blog, strictly speaking my purpose is actually not to help you raise a teenager, but to help you raise your child to be a happy, successful, responsible and independent adult – something that has to happen during the entire dozen or so years of adolescence.