Composure: How to Keep Your Cool 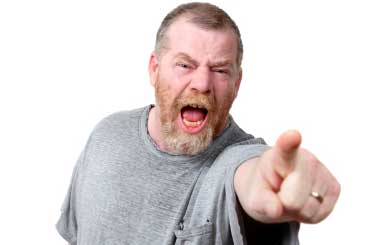 My dad was a really nice guy. But I remember that when I was a teenager, he lost his temper with me three times. Yes, exactly three times. And the sad thing is that half a century later I still remember each incident in detail. In my mind, his reactions were overblown and unjustified. But something set him off.

One of the challenges of being a parent is that sometimes what your child says or does will upset you. This is especially true of teens, who while trying to discover themselves and establish their independence, will push against your norms, values, boundaries, and cautions for safety.

And when you’re upset, it’s natural to want to say or do something in anger. But even though this is a natural reaction, you pay a heavy price when you give in to it. Some words of wisdom…

“If you treat every situation as a life and death matter, you’ll die a lot of times.” – Dean Smith, American college basketball coach (1931- )

The problem is, you can’t focus on everything at the same time. When heated emotions fill your mind, there’s little or no room left for reason. And without the ability to think about what to do, you’ll probably do the wrong thing…

“Good judgment, common sense, and reason all fly out the window when emotions kick down your door.” – John Wooden, American college basketball coach (1910-2010)

“Once a word leaves your mouth, you cannot chase it back even with the swiftest horse.” – Chinese proverb

“Every stroke our fury strikes is sure to hit ourselves at last.” – William Penn, British colonizer (1644-1718)

Do you sometimes lose your cool – react by doing or saying things out of anger? The good news is that you can change this pattern.

Composure is what allows you to stay in control in the heat of the moment. Feel the anger, but don’t say anything, and don’t do anything right away. Pause. Give your emotions a few moments to subside. Then ask yourself this: What I can say or do next that will produce the best outcome?

It will be hard to stay calm at first. You may fail a lot initially, but if you continue making a conscious effort, if you don’t give up trying, with each success it will get easier and your success rate will gradually improve. Eventually, staying calm and collected will come naturally.

“Walk away from it until you’re stronger. All your problems will be there when you get back, but you’ll be better able to cope.” – Lady Bird Johnson, American first lady (1912-2006)

“Nothing gives a person so much advantage over another as to remain always cool and unruffled under all circumstances.” – Thomas Jefferson, American president (1743-1826)