Do You Know What FASD is? Implications for Adolescent Children 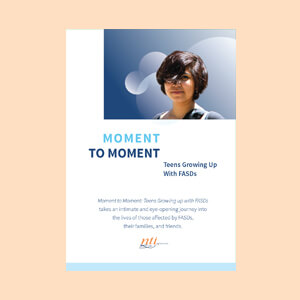 FASD stands for fetal alcohol spectrum disorder: a variety of permanent birth defects caused by the mother’s consumption of alcohol during pregnancy. The mother consumes alcohol, the substance travels to the womb, where it can disrupt normal development of the unborn child’s body and brain, causing permanent disfigurement and brain damage.

You know that doctors warn expectant mothers not to consume alcohol or drugs during pregnancy. Very likely your doctor explained the disabilities that can happen. Every mother wants her child to be born perfect, and most mothers heed the warnings.

But of course not all. In the U.S., more than half a million children suffer from a FASD.

How awful are the disabilities? What do they look like? The horrors revealed in Moment to Moment: Teens Growing Up with FASDs go far beyond a doctor’s warning. Directed by Gabe Chasnoff, the documentary presents the heartbreaking consequences in the lives of four teenagers and their families as they struggle to cope with FASD disabilities.

Mothers may ask whether one drink is okay, but there’s no evidence that any amount is safe. The baby’s brain develops one area at a time, and there’s no way to tell when a sensitive period of development is in process. The most extreme risks come from binge drinking and drinking early in pregnancy.

Actions always have consequences. If a mother abuses substances during pregnancy, the damage to the brain could cause an inability to understand cause and effect, to control emotions, to plan, and to stay focused on a task. Parents may not know that their child is small or slow to learn because of an FASD. A teacher or doctor could mistakenly assume that behavioral problems are due to attention deficit disorder. A judge could sentence a young person to death, not knowing that the crime was directly related to an FASD. An employer could fire a victim for failing to follow instructions, not realizing that the individual needs special supervision. An adult with FASD may never be capable of living independently.

A similar, quite real horror not appreciated by parents: when teenagers drink alcohol or use drugs. Most parents don’t know that the prefrontal cortex – the brain area that handles conceptual thought, critical thinking, control of emotions and impulses, judgment, planning, and organizing – is still under construction during adolescence, which lasts from puberty to the early 20s. When young people abuse substances, the chemicals that travel to their brains can disrupt normal development, causing permanent disabilities, such as diminished intellectual capacity throughout adult life.

Doctors warn pregnant women, but they don’t warn parents about this second period of vulnerability. A college student can binge drink for days at the beach during spring break, and the parents may smile that they are “sowing wild oats,” not realizing their child is risking permanent brain damage.

Read more about this in Chapter 9 of How Your Teen Can Grow a Smarter Brain.