Larry Winget – Your Kids Are Your Own Fault

Over the decades, a lot of bad advice for parents has been published. Strategies such as false praise, helicopter parenting and permissiveness may have played to parents’ fears of losing the love of their child, but the consequences have been horrendous. 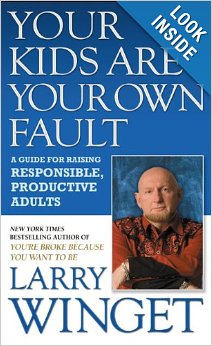 After watching in-your-face truth-teller Larry Winget’s entertaining speech to 2012 graduates, I decided it was time for me to read his parenting book, Your Kids Are Your Own Fault (2010).

Larry Winget, best-selling author, TV personality, and celebrated speaker describes himself as a one-trick pony. He calls himself “the pitbull of personal development.” In his own words, “There is one central theme in all that I do. That central theme is personal responsibility.”

Also, he’s brutally honest and forthcoming when he dispenses advice. Reading one of his books is like talking with somebody with a hair-trigger bullshit detector, a grasp of the facts and an absolute certainty about the truth. When he “tells it like it is,” he knows he makes a lot of people feel uncomfortable, but he doesn’t care. Too much is at stake to mince words. It’s a style that doesn’t always go down easy. One of my Twitter followers described him as a “blowhard.”

As I read Your Kids Are Your Own Fault, I found that I didn’t agree with everything he said. But I did agree with 99% of it. And I love his style. For example, the current tendency to diagnose kids with attention deficit disorders and medicate them to be compliant in the classroom is a matter of controversy. Here’s Larry’s take on it, and no, he doesn’t mince words:

“Medication is easier to administer than discipline. It takes ten seconds to get your kid to swallow a pill. It takes a constant 24/7/365 effort to discipline your child.”

“Teachers have twenty-five little monsters who aren’t paying attention and are looking out the window, picking their noses and eating their boogers instead of learning their lessons. When one or two in the class need some extra attention in order to behave, rather than messing with the fragile psyche of the child by putting him in the corner like Mrs. Bowman did to me, some teachers call the parents of the kid and suggest Ritalin.”

“Okay, it’s your kid and not mine. I am just expressing my opinion here. But tell me how the baby boomers, the most productive generation in the history of our nation, were able to accomplish so much without childhood drugs? How did all of us deal with our hyperactivity without medication? The answer: Our parents and teachers busted our skinny little butts and told us to shut up, sit still and pay attention! That’s how.”

I think that’s what my Twitter friend meant by “blowhard.” On the other hand, I agree with Larry on this one. Plus, I like the way he grabs your attention and makes you think about what he’s saying.

“Kids mess up. It’s what they do. I see it all the time and so do you. I lived with it for lots of years with my own boys. But sometimes I realized that my kids were messing up because they didn’t know any better. That is often the case; kids don’t do the right thing because no one has communicated what the right thing is. As parents, we often expect something from our kids they can’t deliver because we failed to communicate with them what we expected. When that happens, and the kid messes up, it is actually our own failure, not the kid’s.”

That may make some parents uncomfortable, but it’s the truth. Kids can’t read their parents’ minds. More on this:

Another example of in-your-face truth telling:

Multiply the above quotes by 100 and you pretty much have Your Kids Are Your Own Fault: A Guide for Raising Responsible, Productive Adults.

Also a must-read: my new book: How Your Teen Can Grow a Smarter Brain.