Michael Gurian – The Wonder of Boys 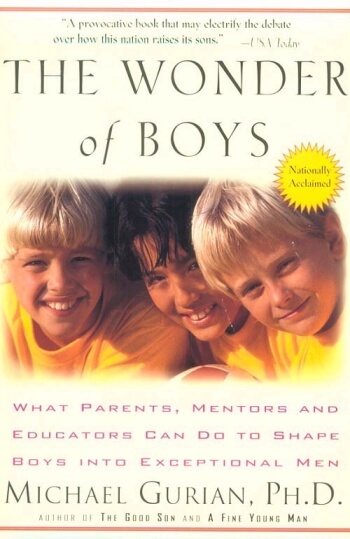 The thing I appreciate most about Michael Gurian’s parenting books is their focus on brain science. I’ve studied the human brain for 25 years, and I can tell you that no parenting author writes with more clarity, authority, and accessibility than Michael Gurian. His grasp of the differences between female brain development and male brain development has allowed him to explain, better than anyone I’ve read, the important differences between boys and girls: how they learn differently and what they need differently to grow up to be the best adults they can be.

This perspective on youth development has led him to conclude that in the early 21st century, boys are at a disadvantage in the classroom. Half a century ago, the opposite was true. But educators enlightened by the feminist movement pushed for equality, and today young women have been empowered to self-actualize in nearly every discipline and at all levels. In fact, now more women than men graduate from college. This outcome has been assisted by the fact that the traditional classroom, with its emphasis on reading, lecture, and other passive modes of learning, is more compatible with female brains than male brains. Also, primary education teachers are mostly female and so understand and relate better to the needs of girls.

The result, according to Gurian, is that the developing brain of boys needs a learning environment that is quite different from the current female-oriented model. Many boys have trouble learning, advancing and maturing in this system, with troubling social and cultural consequences.

The Wonder of Boys (1996) addresses the needs of parents to understand the unique qualities and needs of a boy’s developing brain. Over millions of years of evolution, boys came to be “hard-wired” for physical activity. They are more inclined to be aggressive, competitive and risk-taking—qualities that thousands of years ago made them good hunters and providers, but which in modern culture can lead them into destructive activities. With the right understanding of boys’ needs (which is largely absent today), these qualities can be channeled into positive pursuits. He suggests that parents find ways to involve mentoring adults to assist in the transition from boys to men, much as tribes did in ancient times.

Gurian’s writing is graceful and empathic. He believes a gender-based approach to parenting and education will best address the different needs of boys and girls. To my knowledge, he is the only parenting author who takes this approach. For this reason, I feel that every parent needs to read The Wonder of Boys and the companion book, The Wonder of Girls (2002)—both classics.