‘Take Off Your Mask,’ He Said 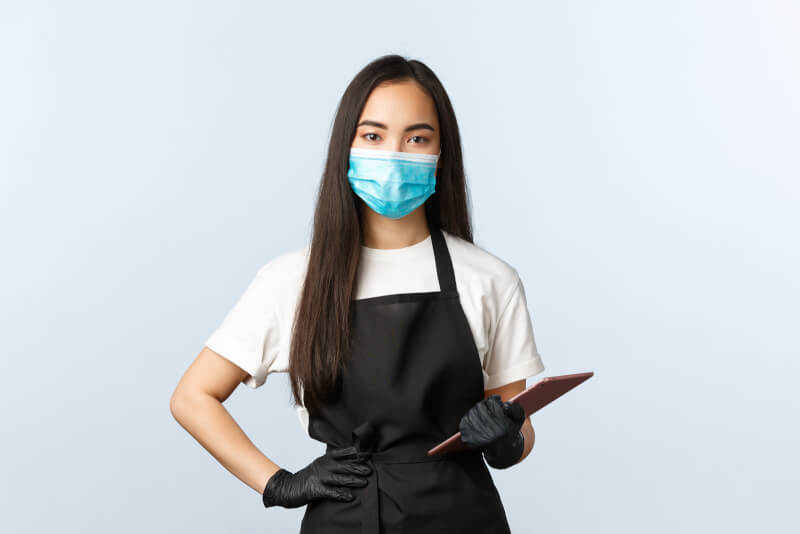 As I write this, the Covid-19 coronavirus in the U.S. has been killing about 3,000 people every day. I know several people who have become infected. A member of my extended family died from the infection. This pandemic has brought out the best and the worst in our fellow Americans. I know several people who rationalize, “Well, the reports are misleading. Lots of people die from the flu, and many of the so-called Covid deaths had another contributing cause.” People refuse to wear a mask. People show up in crowded bars, restaurants, and other enclosed spaces, indulgences that help spread the disease. It saddens me to see this kind of weakness in my species.

Speaking of bars and restaurants, The Washington Post published an article about “boorish restaurant customers” who ask waitresses to take off their mask.  These men are flirting with the young women, thinking it compliments their beauty. But the women know that if they don’t cooperate with this sexually motivated (and possibly dangerous) pressure it could affect their tip. The boorish individuals are almost exclusively men. But what kind of man would do this? And why?

The answer is that consuming pornography, spouse abuse, sexual harassment, sex trafficking, prostitution, and rape are mostly male-initiated. Almost always, it’s the female who is exploited and victimized. Why? Because the hormones that drive sexual aggressiveness are present in far greater amounts in males. This is part of nature. If you enjoy nature documentaries (as I do), you’ve seen how sex happens in the wild. The male deer, the male whale, the male cat, the male bird, etc., is the sexual aggressor. It can be unpleasant to watch; from a strictly biological perspective, sex among animals isn’t polite. But without this drive to force females to engage in sex, there probably would be no motivation to copulate. It’s how animals reproduce. It’s how their species survive.

The human species is not exempt. If males didn’t feel this powerful drive to approach females for sex, natural reproduction wouldn’t happen, and our species (or any animal species) could eventually die out. Beginning with the onset of puberty at roughly age 12, boys begin to feel this urge. They feel it, but they aren’t aware of what they’re feeling or why. So it sometimes gets expressed in unfortunate ways. Boys can make mistakes. They can pressure young girls to send nude selfies and then post them on the internet; girls have committed suicide from the embarrassment. They can use peer pressure to persuade girls to have sex with them; hundreds of thousands of teen girls get pregnant every year. Sexually transmitted diseases are spread. And when the boys grow into men, the sexual urges in all its forms continue.

But while humans are influenced by their hungers, they’re different from animals. Humans can be self-aware and considerate. They can feel sexual arousal and then decide not to upset or harm the other person. Men can express empathy, compassion and respect towards women. They can go to a restaurant or bar and be kind and considerate when a waitress tries to serve them while wearing a mask.

The bottom line: boys (and well, yes, girls too) need to be taught how to manage their sexual urges. I know, this is a difficult topic to bring up with a young person. But your child needs to have a realistic understanding of their sexual nature. They need to be taught the right values and attitudes and how to treat others with respect. They need to learn to self-regulate, applying the kind of self-awareness and morality that will guide them to behave well with the opposite sex. It’s not an easy task, but it’s one of the challenges and responsibilities of a parent. You don’t want your kid to grow up to be the kind of man who looks up at a young waitress and says, “Take off your mask.”

BTW: My colleague, Cath Hakanson from Sex Ed Rescue, can be a great help.