Teen Marijuana Use – The Stupidity Could Persist Throughout Adult Life 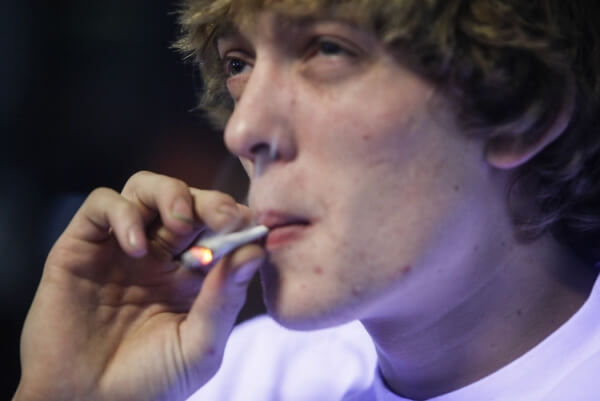 A new study has concluded that teenagers who smoke pot suffer a significant drop in IQ that persists even if they stop smoking it later in life.

The article doesn’t explain why, except for this statement by lead researcher Madeline Meier of Duke University: “Parents should understand that their adolescents are particularly vulnerable.”

Well, there is an explanation.

During adolescence, a child’s brain experiences one final stage of brain development. It’s in the area called the prefrontal cortex (PFC), the part of the brain involved in “connecting the dots” – analysis, judgment, decision making and critical thinking. I sometimes refer to this as “the smart part of the brain,” because what it does makes us far more intelligent than any other animal species.

The PFC is located right behind the forehead. Like all other areas of the brain, development there starts with “blossoming,” when every brain cell there sprouts thousands of tiny connector fibers called dendrites. The connections that are used when the teen exercises critical thinking are reinforced. This causes permanent neural pathways to form, the kind of foundation wiring that gives a young person “a superior mind.”

But it’s “use it or lose it,” because at the end of adolescence, when the developmental window closes, the connections that weren’t used regularly are absorbed by the body and lost forever. What’s left is the permanent foundation for higher-level thinking.

This process – like any earlier phase of brain development – can be disrupted by the presence of alcohol or drugs. For this reason, doctors routinely warn expectant mothers that using cigarettes, alcohol or drugs during pregnancy can permanently damage the brain of the unborn child. After birth, small children typically don’t abuse alcohol or drugs, so more of this kind of brain damage during early childhood isn’t usually a problem.

But brain development isn’t over when teenagers begin experimenting with these substances. And the PFC, the area involved in the sensitive window of development during adolescence, happens to be the area most critically involved in intelligence. If a teen becomes a regular user, the “stupidity” effects won’t last just a few days. Getting high or drunk can cause disruption of normal brain development during a time when the foundation for critical thinking is under construction.

The potential consequences for what might otherwise seem like harmless fun are enormous. The “stupidity” could become permanent.

One of my best friends has a nephew who smoked marijuana regularly as a teenager. My friend says the young man, who is now in his late twenties, still acts like a 15-year-old kid.

This is shocking, isn’t it? And very few parents know about this danger. And practically no teens.

But now you know. Is this information shocking enough to share with other parents?

Teen use of pot is on the rise…

Protecting your teen’s brain will help your child develop vital thinking skills. More about this in my new book: How Your Teen Can Grow a Smarter Brain.