The Kid Got Lucky: From Loser to Legend

“I was a terrible student,” he said, “always staring out windows or looking at the clock, waiting for class to be over.” From a very early age, the only thing that interested him was excitement, danger, and risk-taking. He considered schoolwork pointless, and ultimately graduated near the bottom of his high school class. He found a college that would accept him, but he had no idea what he wanted to do and he didn’t know how to study, so he was failing all his courses.

And then one day as he went into the bookstore to buy some snacks, a book display caught his eye. The book title, The Right Stuff, by Tom Wolfe, intrigued him. He read the first couple pages and was hooked. Back in his dorm room, he didn’t stop reading until he had finished the book. It was about naval aviators and test pilots who became astronauts—smart dare-devils who took amazing risks and survived them and walked with a swagger.

For the first time, he knew what he wanted to do with his life. He wanted to learn how to land jets on the deck of an aircraft carrier at night. But how could he begin to compete with the multi-talented men who attend the U.S. Naval Academy and eventually get chosen to be astronauts? He was, as he put it, “a chronic under-performer with a terrible academic record.” He would have to turn his life around, beginning with taking difficult science and math courses. But he had daydreamed his way through high school, and he had no idea what it took to learn. When he tried to get accepted into the Merchant Marine Academy, they turned him away.

But Tom Wolfe’s book had ignited a fire in him that would not be extinguished. The goal he set for himself seemed impossible, but he didn’t give up. He gained admission to SUNY Maritime College and enrolled in the ROTC program. He learned how to study and made good grades. He took his maritime training seriously. After graduation, one step at a time, one year at a time, always keeping his goal in mind, he qualified for flight training and eventually learned to fly jets. From there he became a test pilot and later, in middle age, he was accepted into the astronaut program. 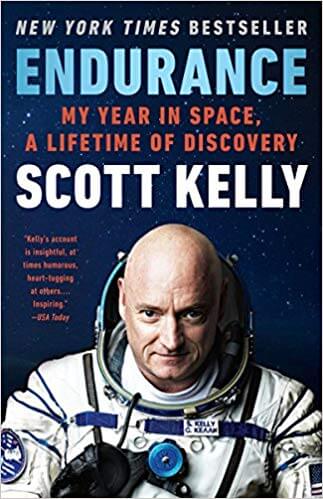 The person I’m describing is Scott Kelly, the man who spent a year on the International Space Station and holds the American record for consecutive days in space. He tells his amazing story in his memoir, Endurance. Obviously a lot of hard work played a huge part in his success, but to me the most amazing part of his story is the fact that if Tom Wolfe’s bestseller hadn’t been on display and grabbed his attention, none of the achievements that came after that would have happened.

His being captivated by the book, The Right Stuff, changed everything. And he came upon it purely by chance. So instead of becoming a working stiff who hated studying and loved danger and partying, he became an American hero, a legendary astronaut.

Here’s another cool story about teens who got really lucky.

The problem is, most kids don’t get lucky. Loving parents with high hopes have always done their best, and then hope that’s good enough. Sometimes it is. Often it’s not.

However today, thanks to recent research into adolescent brain development, parents can take luck out of the equation. I wrote How Your Teen Can Grow a Smarter Brain to help parents and their teens understand what needs to happen to develop important thinking skills. Now a child can decide to do the work, and do it consciously and proactively. The book is based on the latest brain research, but I wrote it in a non-technical, non-academic style, so that any teenager can grasp the insights. If you have an adolescent child, I encourage you to read the book and share it with your child. It could be a life-changer. And if you feel, as I do, that the book has the potential to do a lot of good for a lot of kids, I hope you tell others about it.