Who Am I? A Teenager’s Strange Search for Identity

I saw something striking while shopping for groceries the other day. A young boy, about 13 years old, was walking just ahead of his parents. No, not walking. Sort of dancing, as if he were a lurching, broken robot. A green bunch of hair shot straight up from the top of his head. The back of his t-shirt had the letters JXPR – large all-caps. He seemed to be having a lot of fun with his antics, as if he were saying, Look at me, I’m one of a kind, I’m like nothing you’ve ever seen before.

Yes, he wanted attention. But he was also putting himself out there: This is who I am.

As young teens begin the period of physical and mental growth we call adolescence, they know they aren’t little kids anymore. They also know they aren’t adults yet, either. But who are they? The quest for personal identity is part of growing up.

They want to be someone – often desperately – but they have no idea how to accomplish this. 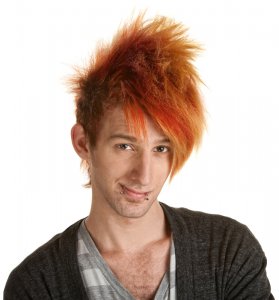 My heart went out to the JXPR kid. Like most of his peers, he thought he could create an identity by dressing and acting differently. For a while, my youngest son wore all-black clothes. Some dye their hair weird colors. Grooming and acting like their favorite rock stars. Body and face piercings, tattoos. This is who I am.

Others take the opposite approach: they assert their identity by conforming to the fashions and norms of peer groups they want to associate with.

From an adult perspective, these ways of creating an identity may seem clumsy, goofy or ill-considered. And why not? What does a thirteen-year-old know about creating a personal identity?

There’s a third, more healthy and fruitful way of creating an identity. It has nothing to do with what a young person looks like. It’s not about finding their identity. It’s about building it. It has to do with becoming the kind of person you ultimately want to be, a process that initially takes the entire period of adolescence and can last a lifetime. This approach takes a lot more commitment and effort than wearing torn jeans or a nose-ring. It involves establishing the values, skills, strengths, and behavior patterns that will lead to a fulfilling life:

Most parents appreciate how challenging life can be and hope that the identity their child is creating will be up to the task. The truth is, only your child can “do the work” of creating the kind of self that will thrive as an adult. In early adolescence, when your child takes these first halting steps towards becoming, you can exercise empathy. Remember that “Rome wasn’t built in a day,” and your kid, not sure who he or she is and not knowing how to create a self, will experiment with roles and images. It’s hard to create a strong, healthy identity and your child will need help. Rather than mocking or criticizing these initial efforts, you can be patient, guide, encourage and support the behaviors and activities that will help the long, slow process of fulfilling self-development.

A green tuft of hair and walking like a dizzy robot may try a parent’s patience. But this is only the beginning. What happens during the next several years will make all the difference.

It will help if your child begins to develop the thinking skills related to good judgment. My latest book, How Your Teen Can Grow a Smarter Brain, has dozens of suggestions for proactively nurturing teen brain development.

Your Unique, One-of-a-Kind Child Needs Help to Leave the Nest

Your Unique, One-of-a-Kind Child Needs Help to Leave the Nest