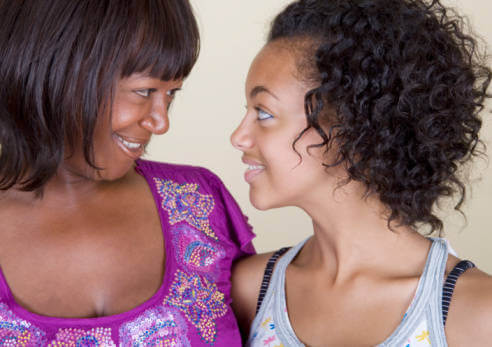 I’m just guessing, but it may be true that no teenager in the long history of planet Earth has ever been given “the brain talk,” even though it’s probably some of the most important information a teen can have. Nevertheless, imagine a young teenage girl having lunch with her aunt, who happens to have read recent reports about the crucial phase of brain development that happens during adolescence.

“Sweetheart, I’d like to tell you about something I’ve learned, and I think it may be one of the most important things you’ll ever hear.”

“Trisha.” For a moment, her aunt didn’t say anything. She just looked at Trisha with an expression of love.

“Trisha, life is a joy, but you know it can also dangerous and unforgiving. You’re a girl now, but as you gradually become a woman your parents will start letting you make your own decisions.”

“It’s because the part of your brain that analyzes and makes decisions is about to enter a major growth phase. And if you do the work to learn to think well and decide well, it’ll make it easier for you to make the right choices.”

“What kind of work?”

“Have you ever seen a drawing or a picture of a brain?”

“Well, when you were born, you already had a complete brain. But the billions of tiny brain cells weren’t connected up yet. Like a new computer with no software. As baby, you learned to crawl by trying hard to crawl. You learned to walk by trying hard to walk. The same with learning how to talk, and so on. You learned all this by doing it. And all this effort caused your brain cells to physically wire together. You were programming your brain. Are you with me?”

“Good. Well, there’s one final part of your brain that is just now ready to be connected.”

“The last part of your brain that gets wired is the part that makes you smart, and it starts now. But in ten years or so, the basic wiring process will stop, and all the connections you never used will die away. Only the ones you used a lot will remain. It’s use it or lose it, and at the end of adolescence your foundation for intelligent thinking will be set for the rest of your life. If you consistently try hard to use good judgment throughout adolescence, by the time you’re in your twenties your foundation for intelligence will be huge. If all you do is have fun, fool around and do dumb stuff, it could be small. It’s totally up to you. It’s located right here.”

She placed the palm of her hand on her forehead. “While your hormones are telling your body to grow larger, they’re also telling this part of your brain to start connecting up the brain cells.”

“Do I stop learning after I grow up?”

“No. You can keep on learning until the day you die. But while you’re a teenager, you build the foundation for learning and smart thinking. Learning is like building a house. The house is knowledge. If you make a small foundation, then you can only build a small house on it. If you lay down a larger foundation, you can build a larger one. Starting right now, you have about ten or twelve years to do as much smart thinking as you can, to build that foundation. After that, the growth period will stop. You’ll be a fully grown woman, and you’ll live with whatever foundation you built during adolescence.”

Trisha looked at her aunt. She still had her hand on her forehead.

“Now you put your hand on your forehead, too.”

Trisha complied, but she took a quick gaze around her. She felt a little silly doing it in the restaurant.

“There you go. Right behind your forehead is the front part of your brain. The smart part.”

“But Aunt Maria, how can I get more brain cells connected?”

“All you have to do is use that part of the brain as often as you can. Be a questioner, try to understand what’s going on in the world and why. Be someone who asks ‘why’ and ‘what if’ questions about everything. Think about cause and effect. Why did this happen? How does this work? If you want to grow up smart, you’ve got to be Miss Curiosity.”

“I don’t think I have a problem with that. I’m already curious. I’m always asking questions about everything.”

“The trick is to think about the future consequences of your actions. Get in the habit of asking yourself, ‘If I do this, what will happen?’ Say that back to me, Trisha.”

“Right. First you ask yourself that, and then you imagine the consequences. You have to always be conscious that you’re about to make a choice, and that you’re in charge of the choices you make. Will you promise me that you’ll always do that?”

“Sure, Aunt Maria. I promise.”

“And if you feel the consequences are going to be bad, then don’t go there. Do you know why I’m telling you this?”

“You want me to stay out of trouble.”

“You got it. But Trisha, you need to know one more thing. There’s a catch.”

“It’s this. Because the smart part of your brain’s under construction, it won’t be so easy to use it. You’ll have good intentions, but you’ll feel like acting impulsively and reacting emotionally instead. Which is what teenagers often do.”

“So what am I supposed to do?”

“Good question. You’ll have two things going for you. First, you already know you need to ask ‘why’ and ‘what if’ questions. You know you have to think about consequences. Knowing you have to do this will actually help you do it. In other words, you’ll need to make an effort. And also, I’ll help you. I’ll be your coach.”

“And other adults can help. A good teacher can help you think while you’re learning. If you make the tennis team, your coach can help you think smart about tennis. Your dad can help you solve problems, if you let him. And your mom. You’re lucky to have such great parents, Trisha. The key is to take what they say seriously. Don’t blow them off just because they’re not telling you what you want to hear.”

Aunt Maria laughed. “You’ll end up smarter than me. I guarantee it.”

Trisha wondered if her aunt was right. The idea that she could end up being that smart made her feel great.

“Well, this has been fun, but we need to get going. You and I have places to go and people to see.”

More about this in my new book: How Your Teen Can Grow a Smarter Brain. Revised and updated!